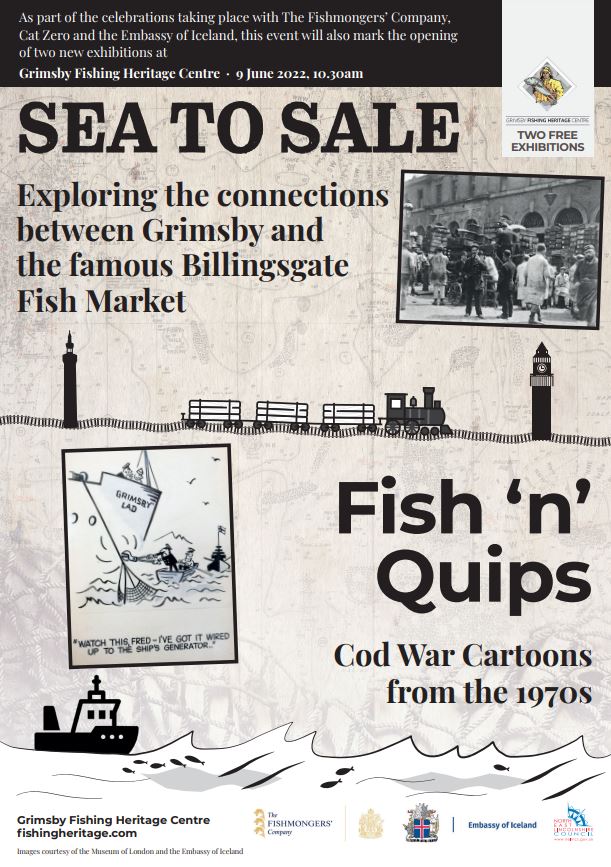 Commemorating Grimsby’s connections between Iceland, The Worshipful Company of Fishmongers and Billingsgate Fish Market, two new exhibitions will run until the end of December. Open to the public 10am to 4pm daily except Mondays at the Murial Barker Gallery at the Grimsby Fishing Heritage Centre.
Sea to Sale explores the historical connections between Grimsby and the famous Billingsgate Fish Market, and how these two iconic areas developed thanks to the fishing industry. The exhibition features historical items loaned from the Fishmongers Company and Billingsgate Fish Market, including a replica of the 1272 Fishmongers’ Company’s first Royal Charter, alongside objects from the collections of Grimsby Fishing Heritage Centre.

Fish ‘n’ Quips explores the events of the First and Second Cod Wars with a display of over 40 satirical newspaper cartoons, on loan from the Embassy of Iceland in London. The exhibition features many original pieces from some of Britain’s best newspaper cartoonists, collected by Niels P. Sigurðsson, Ambassador of Iceland between 1972 and 1976.

Sturla Sigurjónsson, Ambassador of Iceland to the United Kingdom, said: “Despite the jocular term ‘Cod Wars’, these conflicts had serious implications. For Iceland, control and sustainable harvesting of fish-stocks was a matter of national economic survival. For the UK, the longstanding way of life of whole communities, not least in Grimsby, were at stake. However, strong feelings at the time never diminished the mutual respect and affinity felt on both sides. This is reflected in the contemporary drawings and in the relationship between the two countries today.”

Whilst visiting the Murial Barker Gallery do take a look at the 7ft tall Queen’s first official portrait which will be proudly displayed. Only two copies of the original portrait have been made for the Queen’s Platinum Jubilee and Grimsby Fishing Heritage Centre is fortunate enough to be one of the venues receiving a copy.